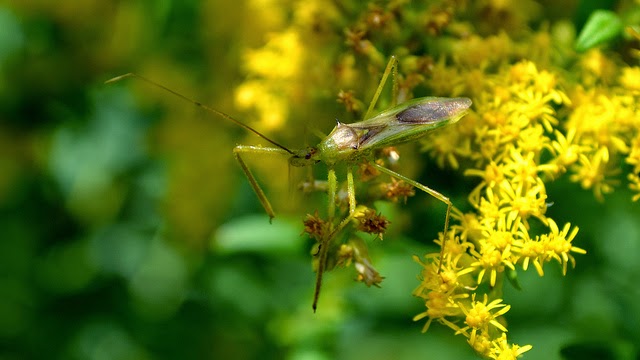 There are currently 60 known species of assassin bugs, most of which are found in Central and South America, with only five species being present in North America. The one shown in the image is called Zelus luridus and it belongs to those five species.

Assassin bugs are as deadly as they sound to their prey of aphids, caterpillars and other common garden insects. After patiently lying in wait to ambush their next meal, the assassin bug strikes quickly and accurately to paralyze its victim by injecting a toxin that dissolves tissue. The assassin bug then sucks up the other insect’s tissue. Adult assassin bugs can measure up to 1 inch long, and have a cone-shaped head and wide curving beak which can cause a painful bite to humans if captured. Even though they have nasty bites, remember that these bugs play an important role in keeping pests under control.

In the video you can to watch an assassin bug ambush its prey: