The fish family of the wrasses or Labridae is a particular large group of marine fishes. It contains over 600 species of mostly smaller (<20cm) and often colourful fish that are associated with coral reefs or rocky shores. Juveniles of some species hide among the tentacles of mushroom coral.

Wrasses are carnivores, feeding on a wide range of small invertebrates. Many smaller species follow the feeding trails of larger fish, picking up invertebrates disturbed by their passing. A lot of labrid species are common in both public and home aquaria.

Two new species have been described by a colleague of many years. Both new species are from the Indian Ocean, one (C. rubeus) from Sri Lanka and the Maldives, the other from the east African coast (C. africanus). The first species was named for its bright red color and the second for its origin.

For the experts: The western and central Indian Ocean population of the fairy wrasse, Cirrhilabrus rubriventralis, is here split into three allopatric species: the type species from the Red Sea; C. rubeus, n. sp., a new central Indian Ocean species from Sri Lanka and the Maldives; and C. africanus n. sp., a new east African coastal species. The three species are mainly differentiated by the color patterns of terminal-phase (TP) males. The two new species diverge from C. rubriventralis in the sequence of the barcode-mtDNA COI marker by 2.6% and 0.5%, respectively (pairwise distance; 2.7% and 0.5% K2P distance). The Indian Ocean species complex made up of the 8 spike-fin species allied with C. rubriventralis is now one of the larger species complexes among labrid reef fishes, showing an interesting pattern of allopatric sibling species dividing up the region, as well as the occurrence of localized microendemic species in Indonesia and the Timor Sea. The species complex includes some species that share mtDNA lineages (phenovariant species), as well as others up to 2.9% divergent in sequence. A neighbor-joining tree and genetic distance matrix is presented for 7 of the 8 known species in the complex.
Posted by Dirk at 10:35 AM No comments: 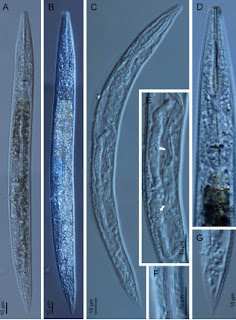 Nematodes are small worms that measure around 1mm in length and live freely in soil or water. They feed on bacteria, single-cell algae, fungi or other nematodes; they can also live as parasites of other animals or plants. But the most striking fact about them is their ability to adapt.

Scientists from the Andalusian Nematology Group at the University of Jaén focused on studying how a type of worm usually associated to damp environments has adapted to life in dry ecosystems in the south of the Iberian Peninsula. This gave rise to the discovery of a new species living only in these extreme environments. The scientists now think they could use it to detect processes of desertification.

The name of the new species was derived from the Latin word hortus, meaning orchard and referring to the habitat of which the species was collected from.

For the experts: A new species of the genus Protorhabditis is described from agricultural areas in the South East of the Iberian Peninsula. Protorhabditis hortulana sp. n. is distinguished by its very small body length (189–222 μm in females), lateral field with two longitudinal wings, lip region rounded with fused lips, stoma 10–13 μm long lacking glottoid apparatus, pharynx with distinctly swollen metacorpus, excretory pore and deirids at basal bulb level, female reproductive system outstretched and spermatheca with self-sperm, vulva slightly postequatorial (V=54–62), female tail conoid (14–19 μm, c= 11.7–17.6, c’= 1.6–2.4) with finely rounded tip, and males unknown. Description, measurements and illustrations, including SEM photographs are provided. A compendium of species of Protorhabditis is also given and illustrated.
Posted by Dirk at 6:27 AM No comments:

The discovery of cave-dwelling fish (and other cave organisms) is usually a rare event. Some of my colleagues have a very good explanation for this: The reason for sparse records of subterranean fishes might be related to the aridity of the area and the rarity of caves. While subterranean fishes are often called “cave fishes”, not all of them are strictly bound to caves. Entering caves is just the way humans approach the underground world and gain access to the macroscopic part of its biodiversity. This means that there is the possibility that many more troglomorphic organisms exist, which have never been observed by humans due to the lack of human-sized openings between the hypogean and epigean worlds.

However, sometimes we are lucky and find an exciting new species such as the new subterranean loach found in Iraqi Kurdistan. The species was named after Graham Proudlove (Manchester Museum, the University of Manchester), a world expert on subterranean fishes. The fishes were actually washed out from an aquifer and ended up in a small river. Here some footage - pretty exciting as it is obviously very rare to see these fishes under normal light conditions:


For the experts: Eidinemacheilus proudlovei, new species, is described from subterranean waters in the Little Zab River drainage in Iraqi Kurdistan. After the discovery of E. smithi in 1976, E. proudlovei is the second troglomorphic nemacheilid loach found in the Middle East and the second species placed in Eidinemacheilus. Eidinemacheilus proudlovei is distinguished from E. smithi by having 8+8 or 8+7 branched caudal-fin rays, no adipose keel on the caudal peduncle, enlarged jaws and a fully developed head canal system. It furthers differs substantially in its DNA barcode (>8% K2P distance) from all other nemacheilid loaches in the Middle East, Europe and Western India.
Posted by Dirk at 6:35 AM No comments: