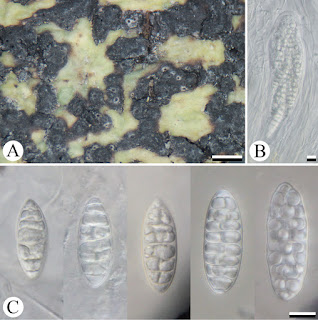 Lichens are fascinating organisms. In fact they are composite organisms build by algae or cyanobacteria living among filaments of multiple fungi in a symbiotic relationship. This combination of organisms has different properties than the individual species that build it.

Until now, the genus Architrypethelium has not been known from southeast Asia but this new species was found in Thailand.

The species name refers to the form of the spores of one of the fungi that are part of the composite.

For the experts: Architrypethelium murisporum Luangsuphabool, Lumbsch & Sangvichien is described for a crustose lichen occurring in dry evergreen forest in Thailand. It is characterised by a green to yellow-green corticated thallus, perithecia fused in black pseudostromata with white rim surrounding the ostiole and small, hyaline and muriform ascospores. Currently, all species in the genus Architrypethelium have transversely septate ascospores, hence the discovery of this new species indicates that ascospore septation is variable within the genus, similar to numerous other groups of lichen-forming ascomycetes. Phylogenetic analyses of two loci (mtSSU and nuLSU) supported the position of the new species within Architrypethelium. This is the first report of the genus in Southeast Asia.